Before I even start to share my joy of this amazing point in my life – being represented by a gallery in Bellagio, I’d first like to try to draw a picture of the place I’m talking about. I believe it is important not to feel like a topographic idiot. 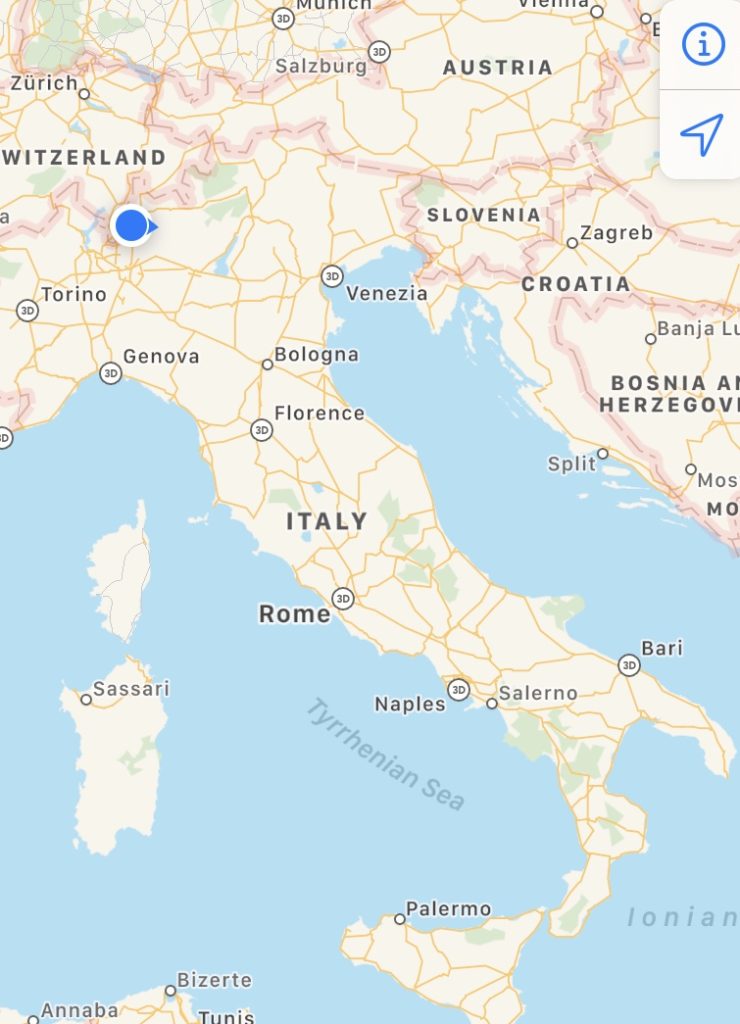 And then specifically Lombardia – the magnificent lake Como. The place indicated by the blue spot is the central part of the lake, the home of the historic village Bellagio. 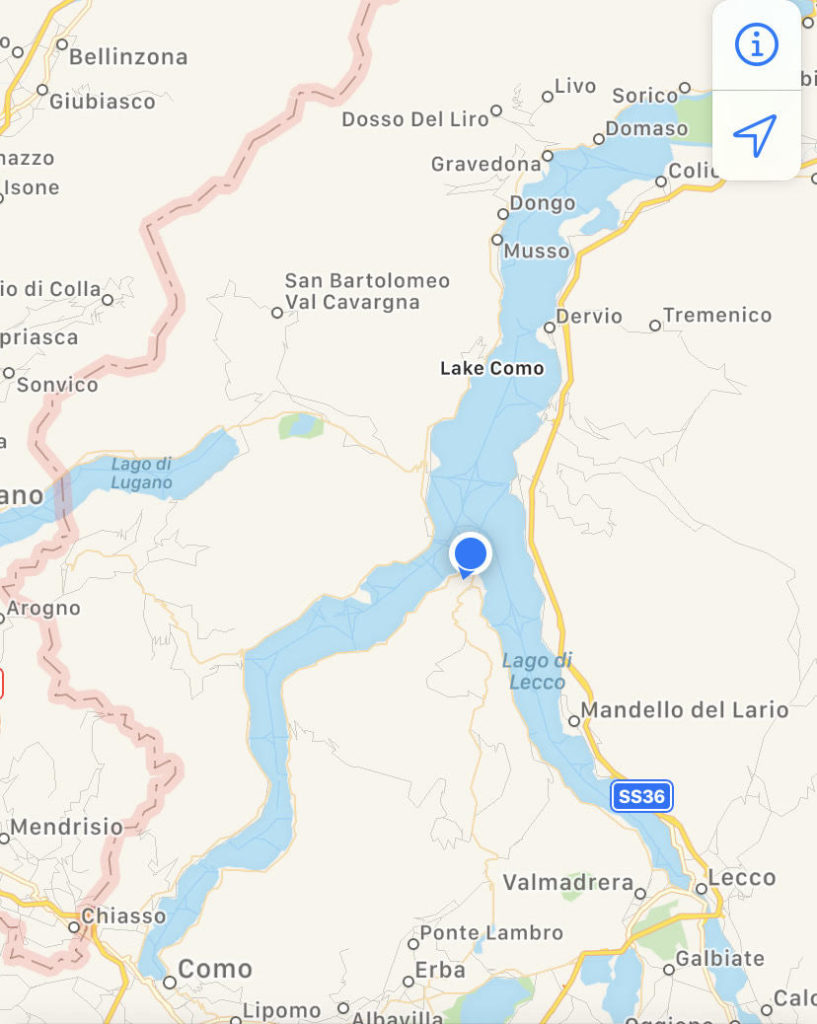 Bellagio is right at the top of this tiny piece of land, surrounded by water from both sides.

Once arriving at Bellagio, one’s breath is taken away by a smell of pine trees, the fresh breeze of the lake, and the scent of home-cooked pasta here and there. Aside from that, there are multiple things to see in the village. You can take a stroll to Villa Melzi and its amazing garden, containing a variety of botanical specimens from around the world interspersed with statues, promenades, and period architecture. Entrance includes access to the neo-classical chapel; museum and gardens with beautiful sculptures and spectacular azaleas and rhododendrons. On the way back to the center of Bellagio you go for a quick, refreshing swim at the Lido di Bellagio and meet the sunset there, with the sun hiding behind the hills, the footsteps of the Alps. 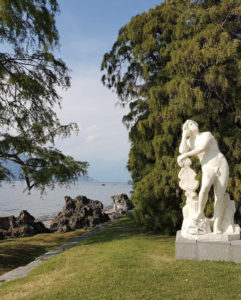 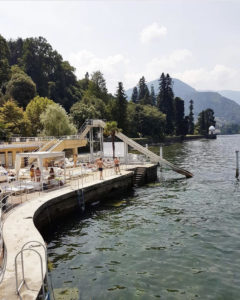 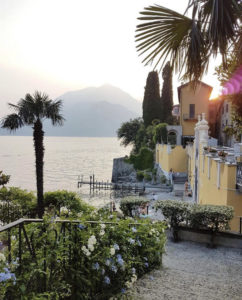 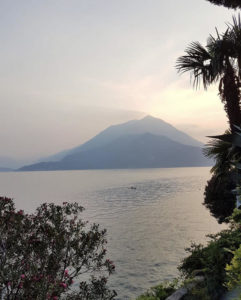 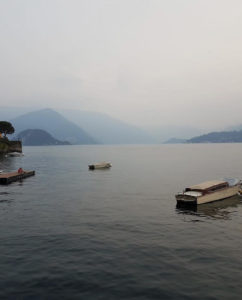 After Lido, head back to the center of the historic village. Wikipedia says there were signs of a human presence around Bellagio in the Paleolithic Period about 30,000 years ago, but it is only in the 7th to 5th centuries BC that there appears a castellum, perhaps a place of worship and of exchange which served the numerous small villages on the lake. But still true – historic.

The first person to leave a record of his stays in this spot was Pliny the Younger in the first century A.D. He owned two villas on the lake where he combined studying and writing with hunting and fishing. Nice life. In the 12th century the village was responsible for the surveillance of the lake, having its strategic location.

Towards the end of the 19th century, Bellagio having deserved its strategic status and popularity among tourists and explorers, the first luxury hotels were opened, offering the same level of elegance and comfort as the finest hotels in Europe. The Bellagio Hotel was the first hotel to be opened in 1825. Following this example several splendid hotels sprang up in a short time, many of which are still open today and several of which are still run by the founding families, such as the Hotel Florence (1858 – now the Hotel Du Lac), the Hotel de la Grande Bretagne (1861), a new Hotel Florence (built in 1870 on the site of what had been the residence of the Capitano del Lario), and the Grand Hotel Bellagio (1872 – now the Grand Hotel Villa Serbelloni). In 1888, the three major hotels (Genazzini, Grande Bretagne and Grande Hotel Bellagio) introduced electric lighting to the town as a substitute for gas. The finest family villas of the area followed only much later.

During the Belle Époque, Bellagio offered three working theatres, at a time when Milan could only boast two!

Almost all of Europe’s most illustrious names of the last two centuries have signed the guest books of Bellagio: the great composer Franz Liszt passed a long and enchanted honeymoon here with the Countess D’Agoult, and it was here that he wrote some of his immortal works. There was also no shortage of crowned heads: Maximillian I, the Empress of Russia Maria Feodorovna, the Emperors of Austria Franz I, Ferdinand and Franz Joseph, Kaiser Wilhelm, the King of Albania, Leopold I of Belgium, Queen Mary of Romania, Umberto and Margherita of Savoy and King Farouk of Egypt.

To many Bellagio probably is most known as an inspiration to its Las Vegas brother – one of the grandest hotels called by its name. The artificial lake with the fountain in front of the Las Vegas hotel (think of the scenes from movie Oceans’ Eleven) was made to channel the elegance of lake Como. Other than that, Bellagio is the dolce vita (of the North) epitome. Luchino Visconti put Bellagio in a scene of his film “Rocco and His Brothers”(1960).

Now having this in mind, imagine you are on the streets of this village and you arrive at one of the most searched online and Instagrammed streets of Italy – Via Giuseppe Garibaldi. 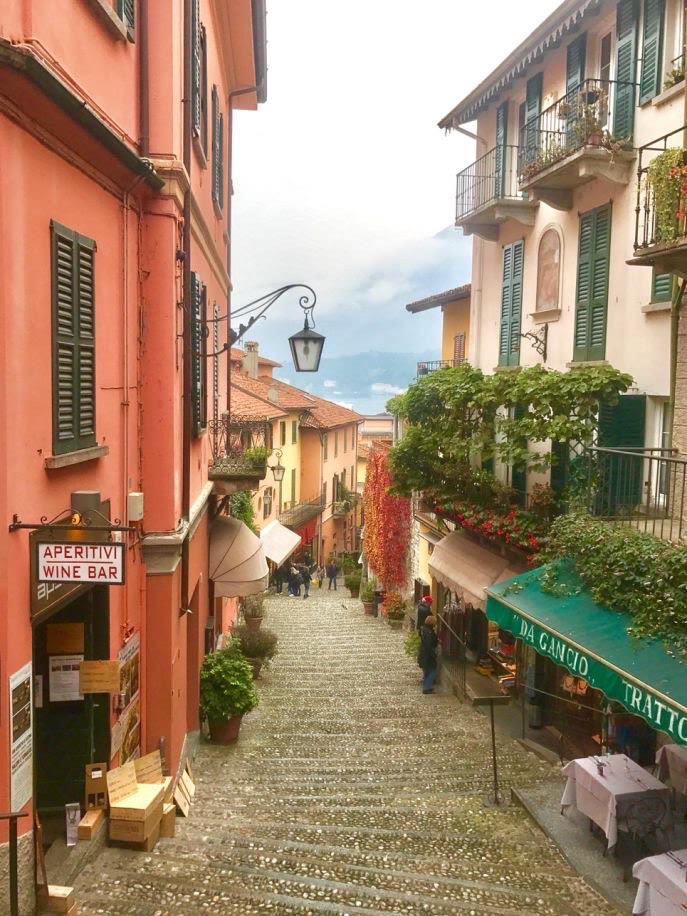 You walk down the steps of the street – cafes and restaurants full of people. You see the brightest yellow windows and a lively pink sign that says – VALENTINARTE Art Gallery. 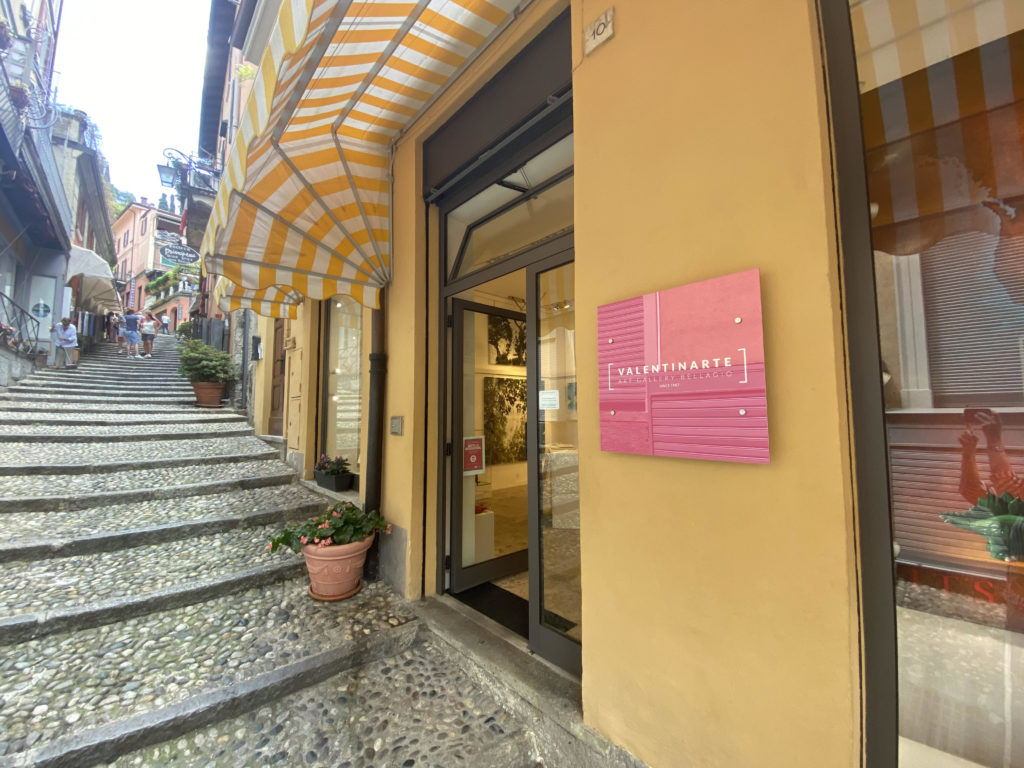 VALENTINARTE Art Gallery was established in 1987 under Emanuele Falconi’s initiative. He decided to open a new and unique art space in Bellagio with a special selection of modern and contemporary artist’s artworks, plus his huge and wide collection of antique etchings and prints of Lake Como. Now his wife Barbara manages the gallery.

Barbara is a warm host, she will make you feel at home, surrounded by the art in her gallery. The gallery is called in the name of their daughter – Valentina, carrying the family-feel inside its walls. I first visited her gallery last year, curious about works and artists which portray the feelings and views of around the lake.

And now, a year later, with utmost pride and joy, I can share that among many artists represented in the gallery you will also find my oil paintings. I have come to Bellagio with four: Waterlilies, Lemons, Italian lounge, and Italian garden. 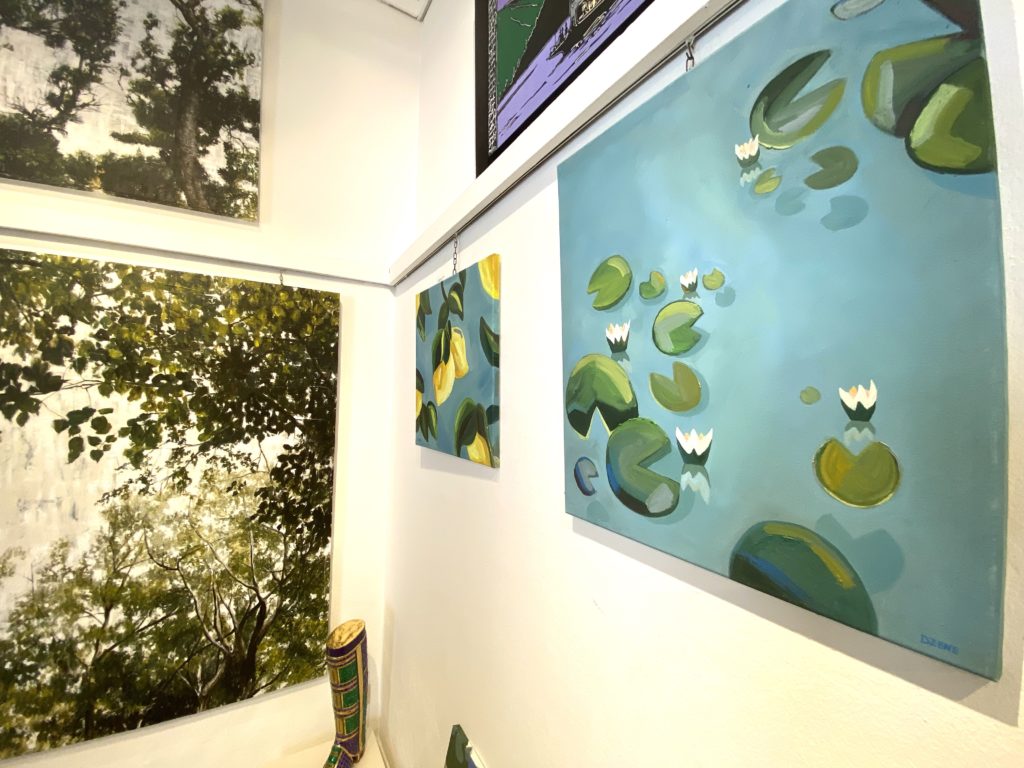 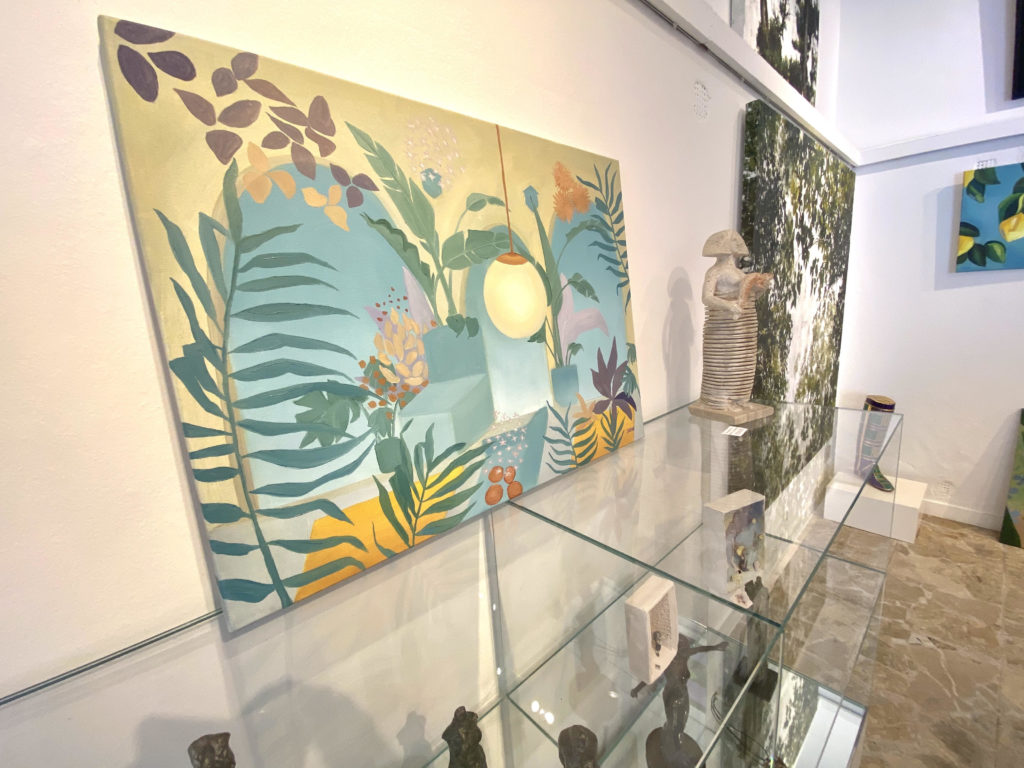 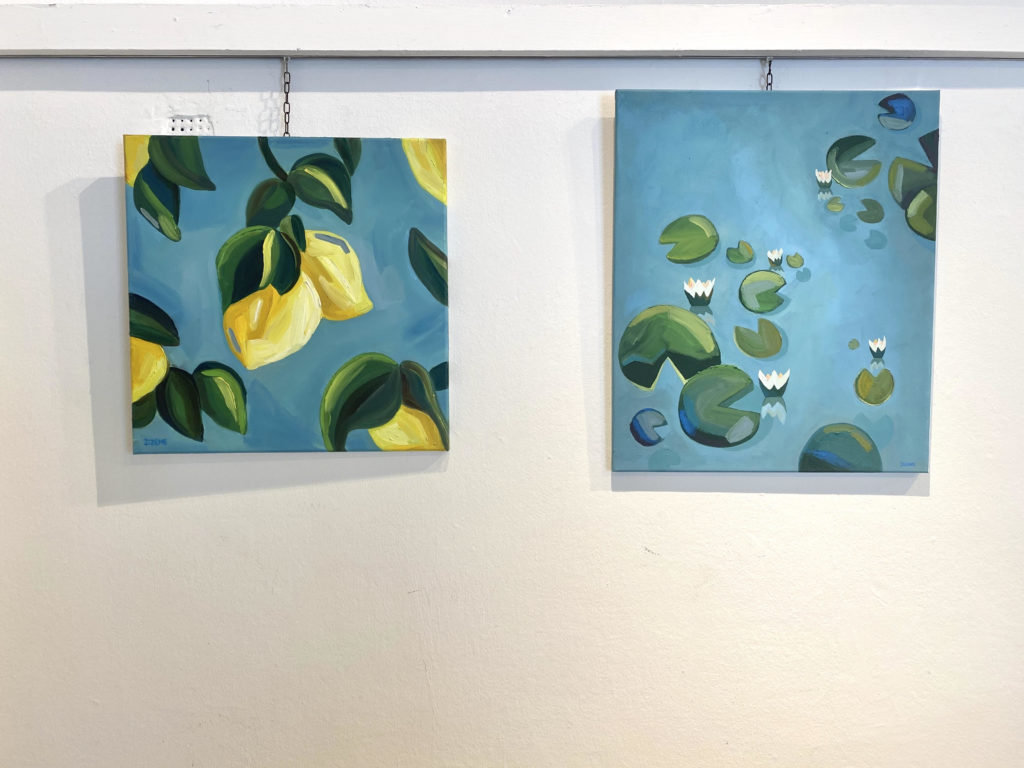 All four are oil paintings on fiber canvas, in varied sizes (the smallest being 50cm x 50cm and biggest – 70cm x 100cm). The main motive is an ode to life by the lake Como. 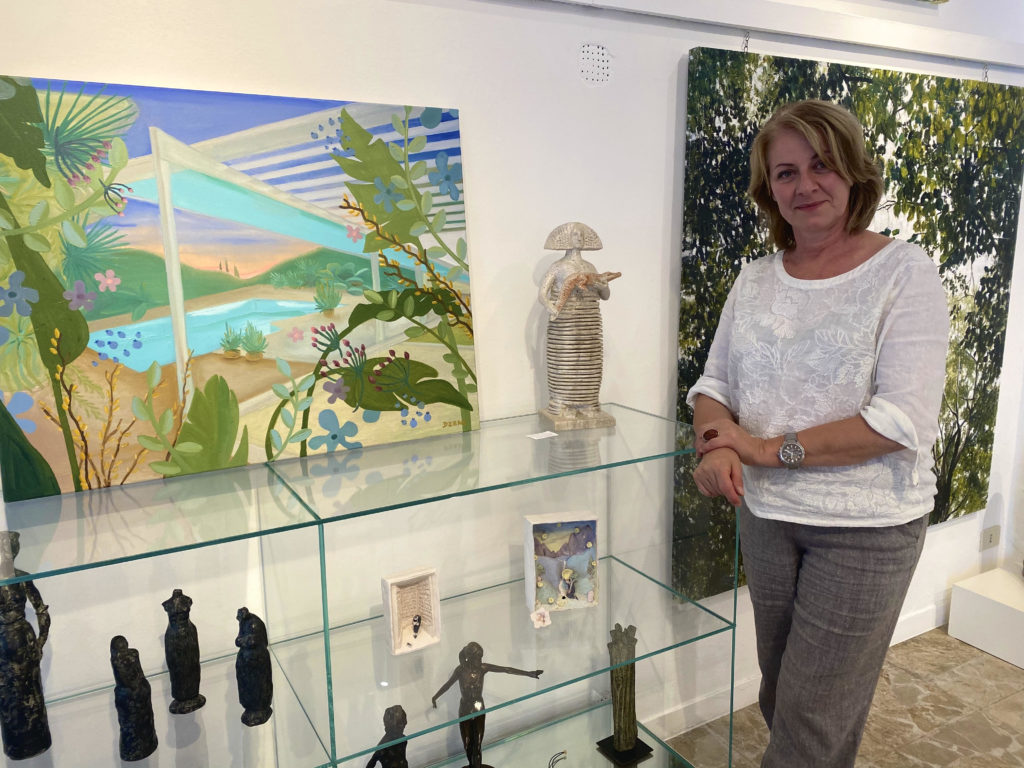 Having worked with collectors and art lovers mainly online, VALENTINARTE Art Gallery is the first gallery to exhibit and sell my works.

I’m happy and grateful beyond any borders! And I’m excited to share my art with the local community, as well as guests of the village.

Dear reader, if you are thinking of visiting the North of Italy, do go to Bellagio – you will not regret it. And you will be most welcome at the Gallery, to see other artists as well as my paintings. The working hours of the gallery are from 11:00 to 18:00 daily. 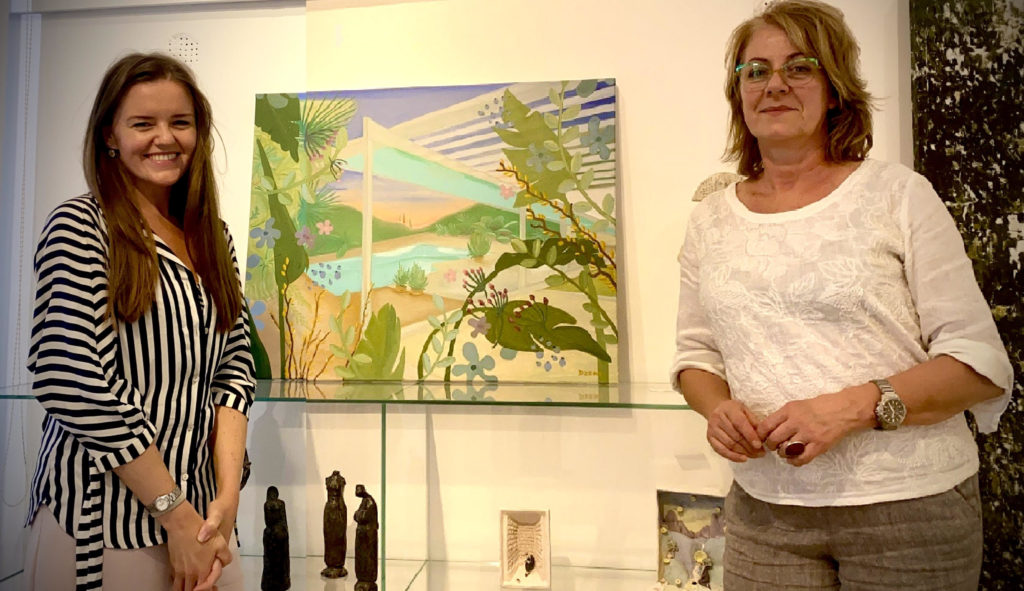 2 comments on “My art in Bellagio, Italy”

Diana, you have deserved all this joy. you paintings are astonishing!!!